Bournemouth are in England’s top-flight for the first time in their history. It was always going to be difficult for them to stay there, as with all new comers, but now they have three long-term injuries suffered to three very important players. For any promoted side it’s always a difficult choice between going with the players that got you there or making wholesale changes. Bournemouth have gone the route of mainly going with the players that got them there, whilst adding several new additions. Fellow promoted side, Watford have gone the route of making wholesale changes. Only time will tell which of these decisions pays off for these clubs.

Bournemouth have made a steady start to the season, picking up 7 points from their first 7 games in the Premier League so far. Two wins, firstly at Upton Park against West Ham, and then beating Sunderland at home. They have also made it through to the 4th round of the League Cup where they next face a trip to Anfield, a ground they have already visited in the league and were unlucky to come away with a 1-0 loss. 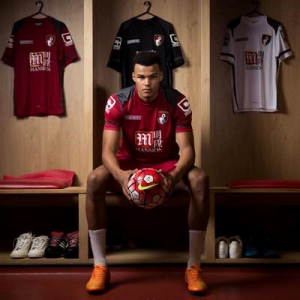 There cause this season won’t be helped by the three long-term injuries they have picked up at the start of this season. The first injury suffered was to record summer signing Tyrone Mings, who signed for £8million from Ipswich. Mings suffered a knee injury just six minutes into his debut against Leicester City. It was initially thought he may be out for three months, but scans revealed he would be out for up to a year. Mings is devastated by the injury but is determined to come back strong than ever.

Bournemouth winger, Max Gradel, a £7 million pound purchase, picked up the second long-term injury for the club, another knee injury, in the same game against Leicester.  The Ivorian, like Mings, looks set to miss at least the rest of the season. Gradel is a former Leicester play and had in fact been on loan at Bournemouth from Leicester in 2007/08 season. Left-winger Gradel had made a good start to his Bournemouth career, making four appearances in the league and providing two assists for his team. He caused serious problems for West Ham in their 4-2 victory at Upton Park.

This article is for TheFunnyOldGame.com Read the full article here